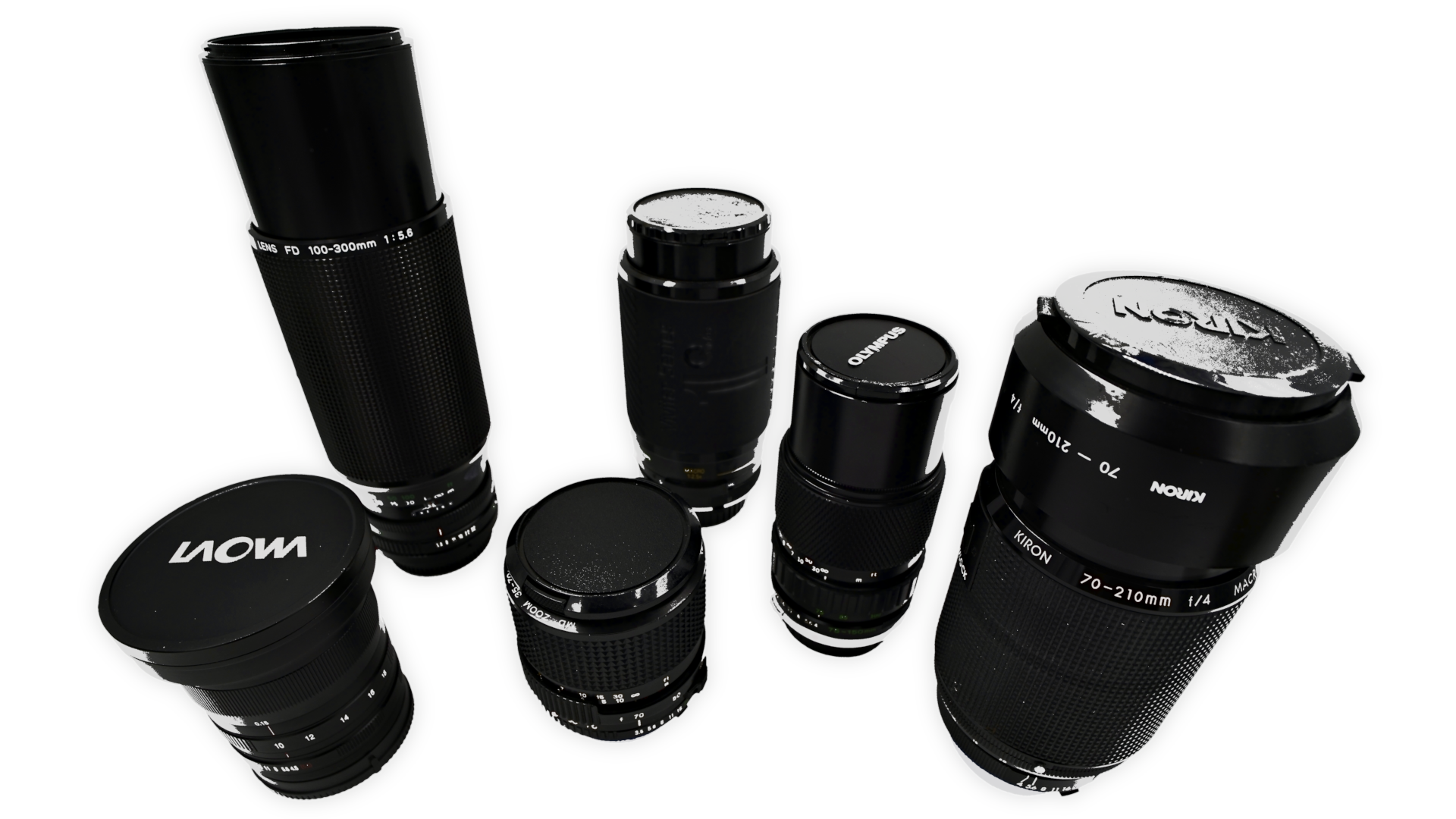 Are you one of the many of us who regularly use unchipped manual or adapted lenses on mirrorless cameras that have in-body image stabilization (IBIS)? Hopefully, you already know how to tell your camera that it should let you "shoot without lens" and how to enable IBIS despite your lens not having a chip communicating with the body. Beyond that, IBIS needs to know the focal length of your lens in order to know how much to correct for movements, but it's a pain to have to change that setting every time you zoom in or out a little. How bad is it if I just pick one focal length for a zoom lens rather than always adjusting? What focal length should I pick? Well, here's a good, detailed, answer that's not too wrong... to discover just how wrong, scroll down the page....

You can interactively change the zoom focal length range using these two sliders; make them the same for a fixed-focal-length lens:

You also can interactively pick a focal length you'd like to try, currently set at mm:

The following interactive graph responds to the above sliders:

In the above graph, for each actual focal length along the graph horizontal axis, the percentage movement error is plotted on the vertical axis. Positive errors mean the sensor would move too much; negative percentages mean the sensor would not move enough. Horizontal lines are drawn to show how close to the exact focal length the setting must be in order to achieve a benefit from 0 to 3EV (stops). For example, 50% movement error would mean you still get about 1 stop worth of benefit, although the movement is overcorrected. More than 100% movement error would mean IBIS is actually overcorrecting so much that it is actually amplifying blur rather than reducing it. Notice that you can never pass -100% movement error. Very small IBIS focal length settings scale sensor motion down, with the no-motion limit of -100% essentially meaning IBIS is turned off.

The graph not only shows the user-selected IBIS setting, but also the results of several other common IBIS setting choices:

Incidentally, you should have noticed by now that getting 8EV (i.e., 8 stops) of correction requires quite high accuracy in setting the focal length: basically, to less than half a percent. In fact, it is really a lot more complex than just that, with how the camera is held, camera-based vibration, which axis motions are present, IMU (inertial measurement unit) and motion-control system response, inherent off-axis quality drop, etc. Put simply, it just is not likely that any real circumstances will see 8EV improvement (and no, the CIPA tests are not very real circumstances). On the other hand, 3EV is very useful, a real possibility, and a good target to aim for with IBIS settings.

Other Things You Can Do

If what you learned about IBIS here leaves you a bit disappointed, remember that there are things you can do to make it better.

Many mirrorless cameras don't have great grips, and people often hold them in ways that make shake worse -- especially when using the rear LCD for framing. Even the act of punching the shutter button too authoritatively is notorius for causing Roll. However, you can train yourself to be better. One trick is to deliberately set the IBIS to a very wrong focal length, so that any shake is wildly exaggerated in the live view for practicing holding the camera. This type of "bio-feedback" can make it much easier to tune your grip. Many professional photographers are able to synchronize exposures with their breathing and even hearbeats; I learned this trick decades ago, and it often delivers 5EV or more benefit over the usual 1/f rule, which states one should use a shutter speed no longer than the reciprocal of the lens focal length on a full-frame camera. Incidentally, if you use a vibrating power tool, such as a weed-eater, it is common to have microtremors that require a hand-holding at a higher shutter speed for up to a day or so later.

It's also important to remember to use the features your camera has. For a mirrorless camera to capture a still image, the mechanical shutter first needs to close to end live view and then to re-open to start the exposure. That fast mechanical sequence can generate significant shake, as was particularly problematic with Sony's original A7R. Electronic shutter might suffer from a slow scan ("rolling shutter"), but it doesn't have any mechanical parts making fast, jerky, motions. Alternatively, many mirrorless cameras have an electronic first curtain shutter (EFCS) mode that combines a non-mechanical electronic pixel reset to start the exposure with the mechanical shutter closing to end the exposure. EFCS generally has a faster traversal time, and sometimes even gives higher dynamic range captures, than electronic shutter, but the electronic reset isn't quite in the same plane as the mechanical shutter closing, which can deform bokeh. We discussed these issues in Shuttering methods and the artifacts they produce.

OK, Tell Me How This Is All Wrong

I've already hinted at some of the issues involving use of IBIS, but before getting into details, it makes sense to say a bit about what IBIS is trying to do and how. Let's start with the axes: there are 3 linear axes and 3 rotational:

At normal distances, the linear X, Y, and Z motions are not very significant. However, Roll, Pitch, and Yaw are. Note that normally the orientation is ceneterd on the sensor with Z is looking out the lens, X along the sensor's long dimension, and Y in sensor's short dimension (pointing up).


Incidentally, all three of the above active methods suffer some response lag from the time it takes to translate IMU detection of movements into compensating mechanical motion. Fortunately, most larger-amplitude shake tends to be dominated by relatively low frequency patterns, but not all.

The more one understands the issues described here, the happier one tends to be about IBIS in particular. It's a very clever and effective technology that's cheap, compact, and commonly corrects more types of motion than OIS -- especially Roll, which is often the dominant axis for shake when holding a camera with two hands (see our work on characterization of camera shake). However, you also should understand IBIS isn't magic, and the tech depends on getting a lot of details precisely right. With unchipped lenses, you are very unlikely to get enough details right for much better than 3EV correction.

Incidentally, there are ways that a camera could be programmed to automatically determine the appropriate IBIS parameters while using an unchipped lens. Unfortunately, none of the commonly available as new mirrorless cameras currently support running such software in-camera. We have prototyped this type of in-camera application using CHDK, but at this time none of CHDK, Magic Lantern, nor OpenMemories has resulted in a suitable auto-IBIS-adjustment app.

This page, and the javascript code it contains, were written by Professor Hank Dietz as a free service to the community. If you are interested in learning more about use of unchipped manual and adapted lenses on modern digital cameras, you also might enjoy DPReview's Adapted Lens Talk forum, which is what inspired creation of this page.